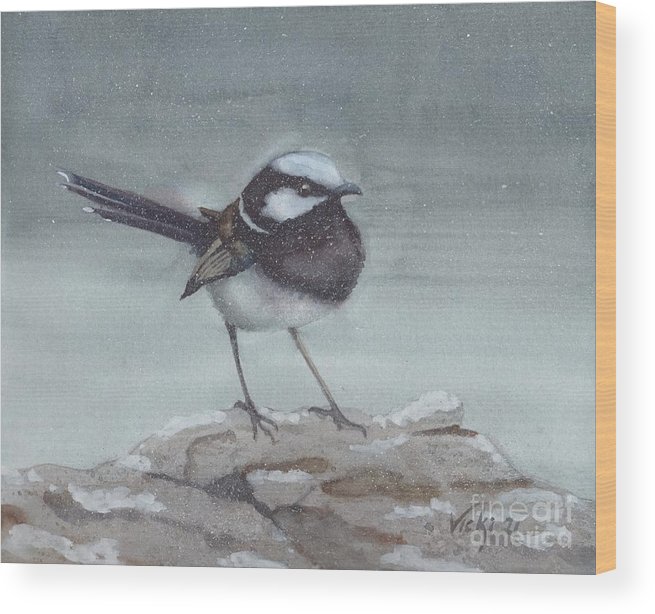 The watermark in the lower right corner of the image will not appear on the final print.

by Vicki B Littell

Superb Fairy Wren wood print by Vicki B Littell.   Bring your artwork to life with the texture and added depth of a wood print. Your image gets printed directly onto a sheet of 3/4" thick maple wood. There are D-clips on the back of the print for mounting it to your wall using mounting hooks and nails (included).

The superb fairywren is common and familiar across south-eastern Australia. It is a sedentary and territorial species, also exhibiting a high degree... more

The superb fairywren is common and familiar across south-eastern Australia. It is a sedentary and territorial species, also exhibiting a high degree of sexual dimorphism; the male in breeding plumage has a striking bright blue forehead, ear coverts, mantle, and tail, with a black mask and black or dark blue throat. Non-breeding males, females and juveniles are predominantly grey-brown in colour; this gave the early impression that males were polygamous, as all dull-coloured birds were taken for females. Six subspecies groups are recognized: three larger and darker forms from Tasmania, Flinders and King Island respectively, and three smaller and paler forms from mainland Australia and Kangaroo Island.Like other fairywrens, the superb fairywren is notable for several peculiar behavioural characteristics; the birds are socially monogamous and sexually promiscuous, meaning that although they form pairs between one male and one female, each partner will mate with other individuals and even...

About Vicki B Littell

Vicki B Littell is an Australian watercolor artist living in Florida. She has been professionally creating art since 2016. Her work is influenced by her love of the "sunburnt country" and people's life stories. Her unique style is easily recognized by the brilliant translucency of primary watercolors. She mixes realism with impressionism, and focuses on the mood of the subject whether be a moment in time, a landscape or a portrait. Vicki believes a painting is not complete until the soul is captured. While watercolors are her favorite medium, she enjoys sketching in graphite and charcoal. Often times Vicki will refer to her urban sketch journals for inspiration. She carries a sketch pad to capture the feel of a scene and documents it...